This year’s company Christmas party was something out of the ordinary, as instead of just hiring a pub in London, they took us to Paris! It was a day trip with Eurostar, but I and a few others decided to stay for an extra night. It was actually my first time in the city of love, but it was just as awesome with just my colleagues – no romance needed!

In this post, I’m sharing a few tips for Paris, based on my very short experience. I hope you will find it either useful or entertaining! 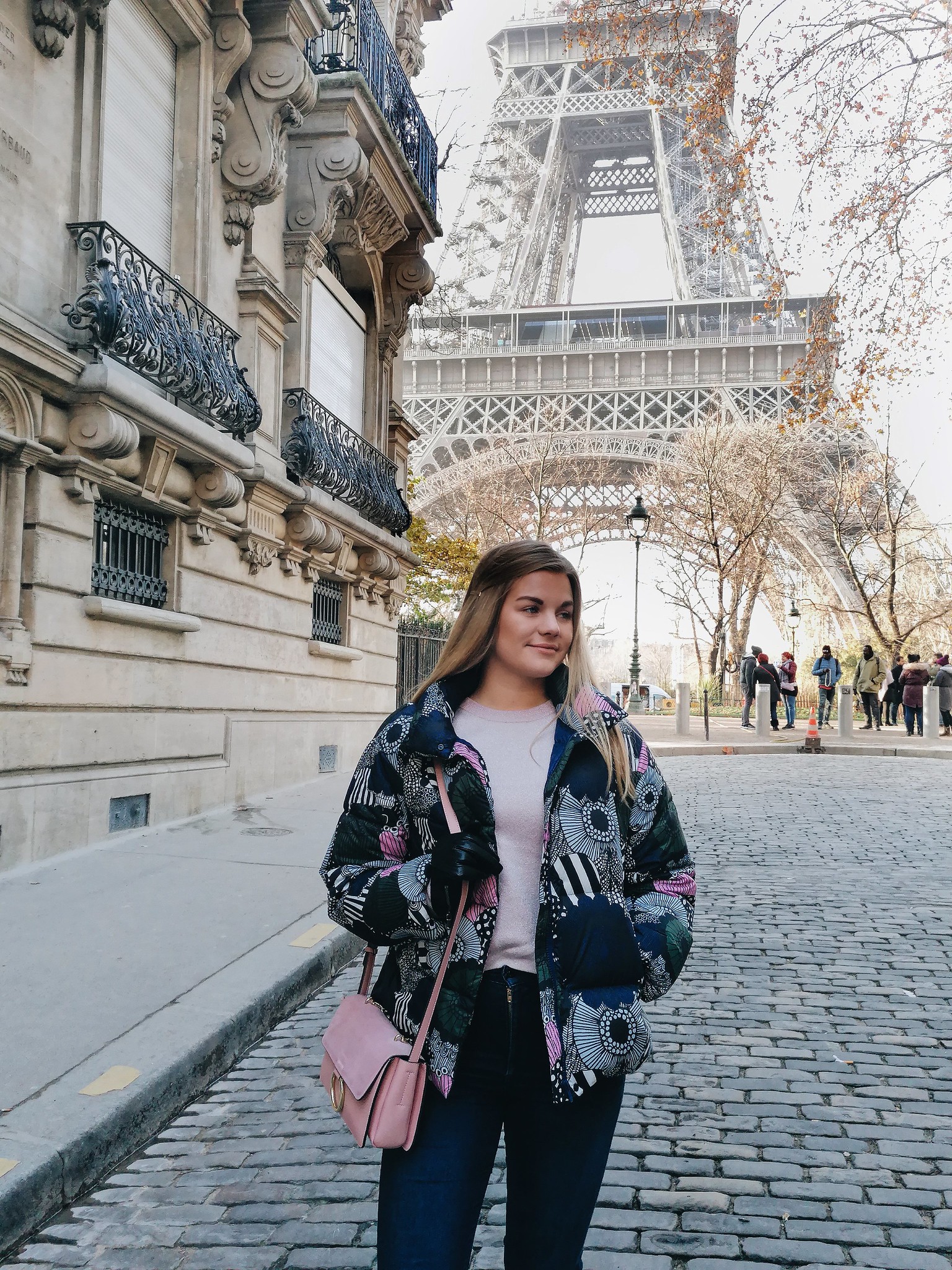 The first thing we did was a walking tour in the Latin Quarter of Paris, which is the oldest part of the city. The best schools and universities in France are located here, and due to the history and vast number of students, the cheapest beers in Paris can be found here! 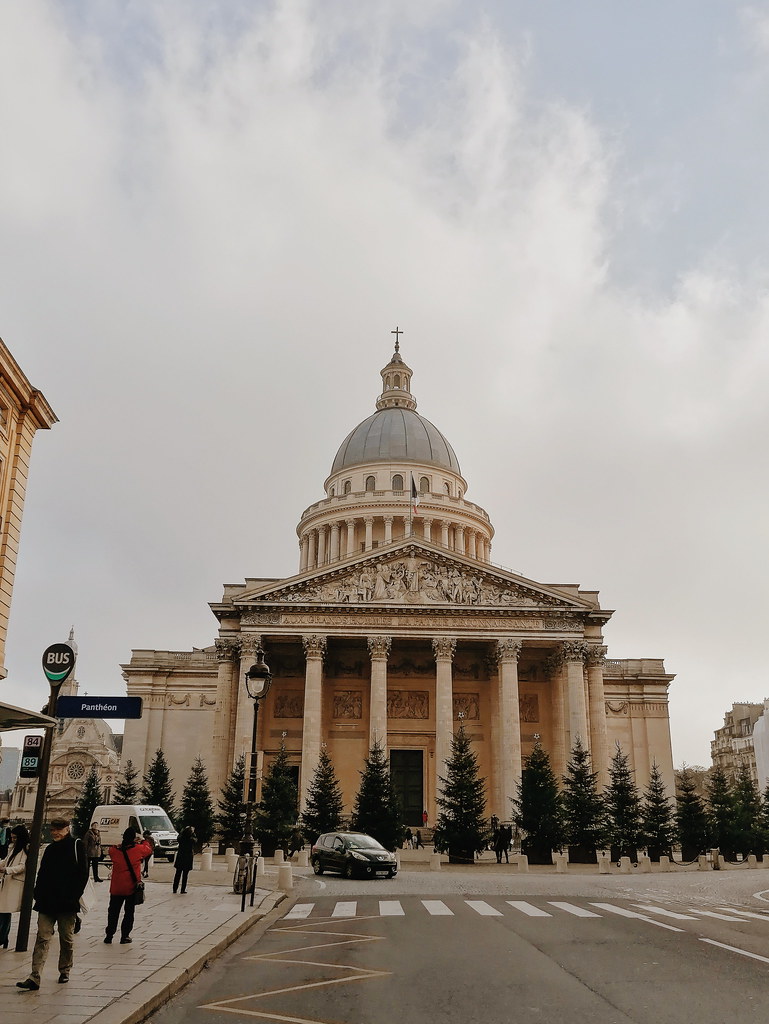 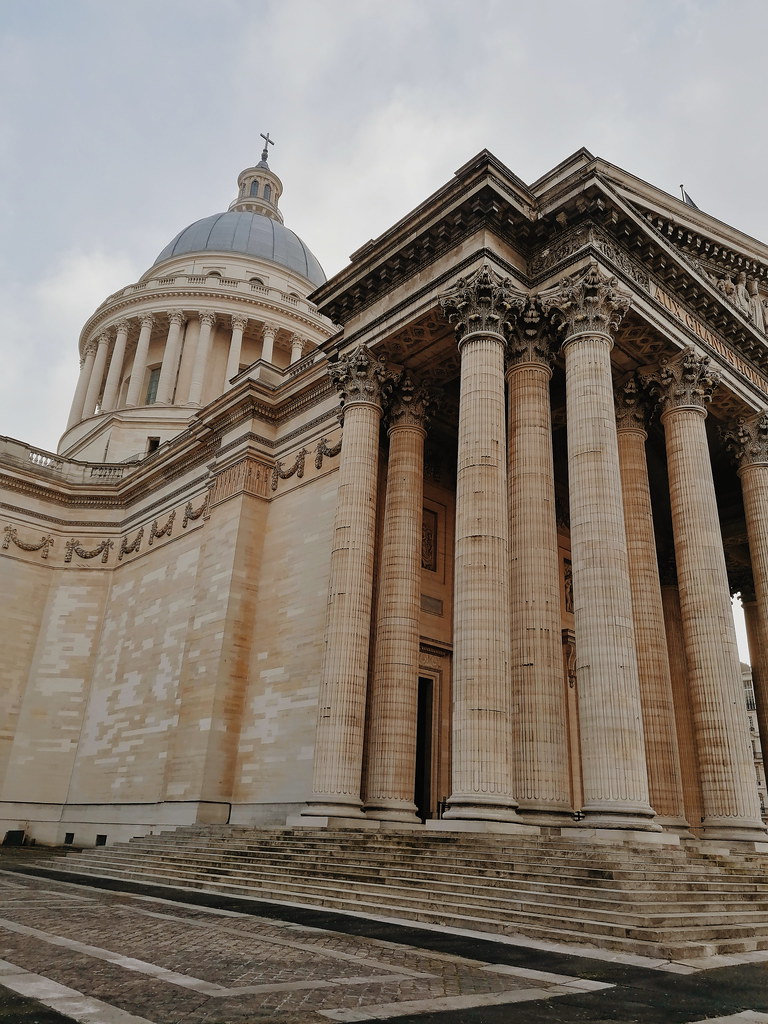 On the walking tour, we saw, for instance, Pathéon, which was built for the patron saint of Paris, Saint Genevieve. Ludvig XV started building it, and it was only ready when the French revolution happened. Since the revolution, the church has had multiple other purposes but is now best known as the burial place of some of the most remarkable French people – only a few spots are left! 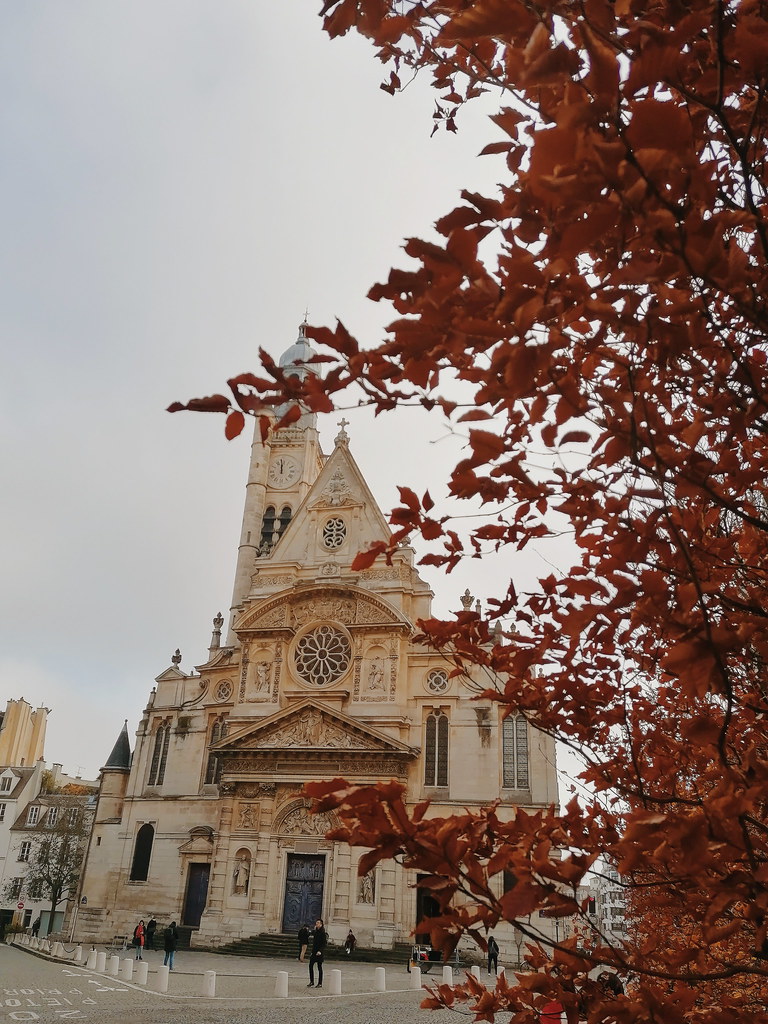 Saint-Étienne-du-Mont  is a memorial church built for Genevieve, and it’s located right behind Panthéon. In the movie Midnight in Paris, Gil sits on the steps of this church when he sees the car that takes him to the world of Hemmingway and the rest. I hadn’t ever really thought about it, but Hemmingway did actually live in Paris, only about a block away from Saint-Étienne-du-Mont, in fact. As I mentioned, you can find the cheapest beers in Paris from the Latin Quarter, so it’s no wonder it was an area in favor of the fun-loving authors.

Here are a couple of other photos from the Latin Quarter: 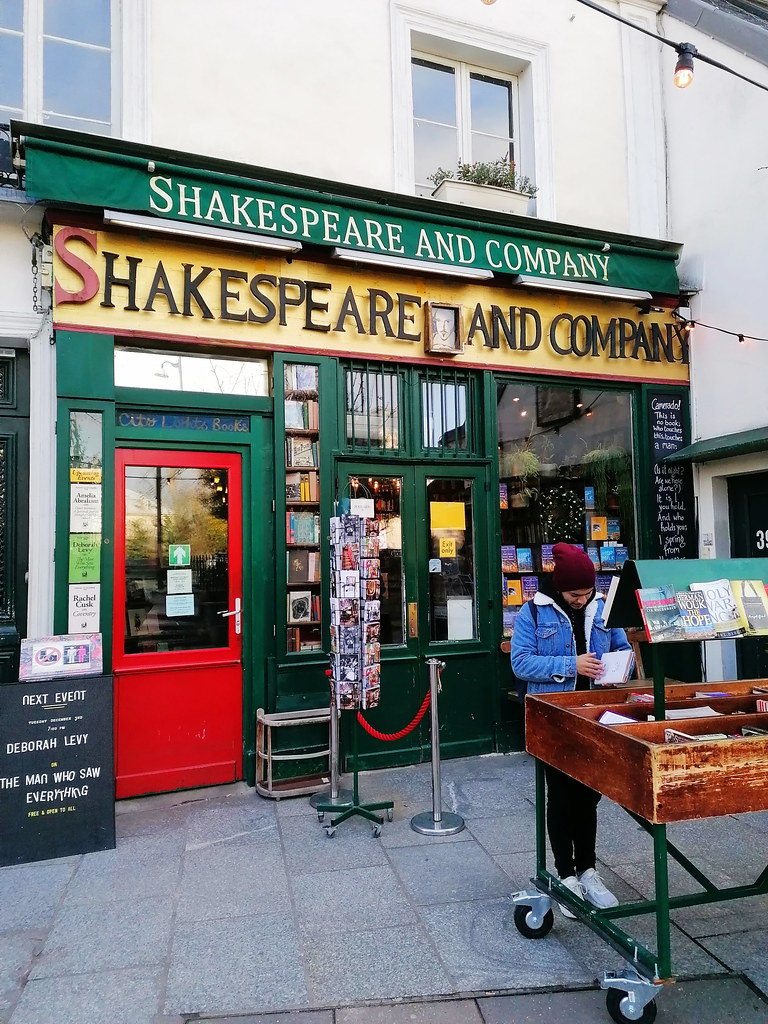 Shakespeare and Company is a famous book shop, and from this location, you can also look at Notre-Dame. 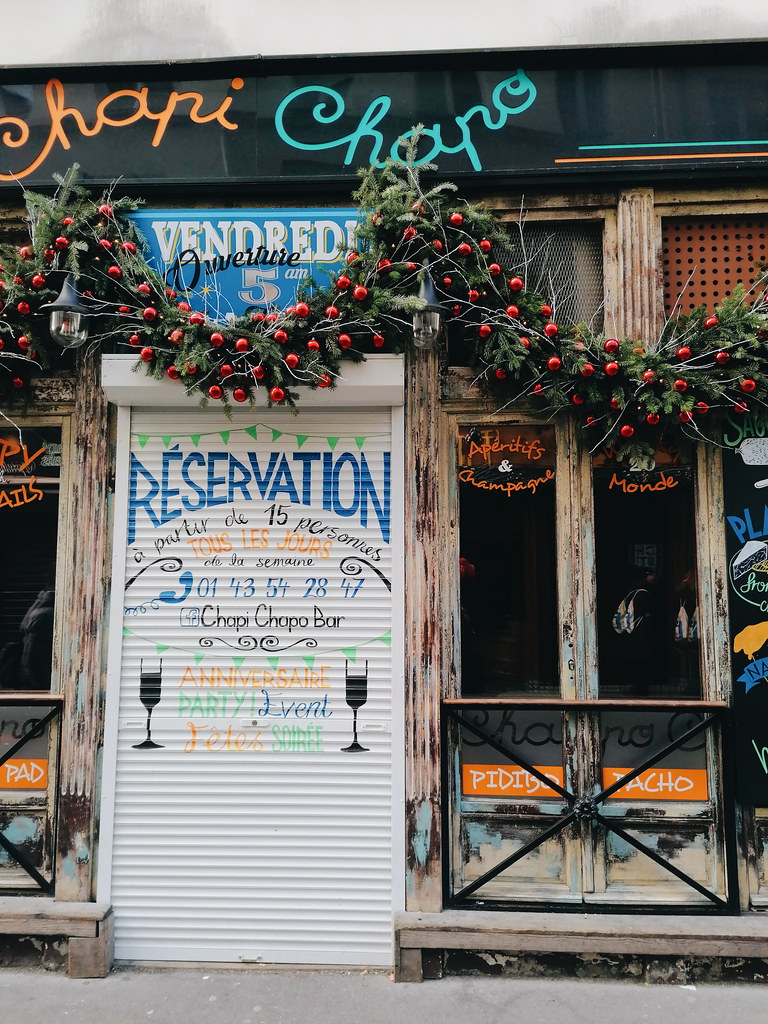 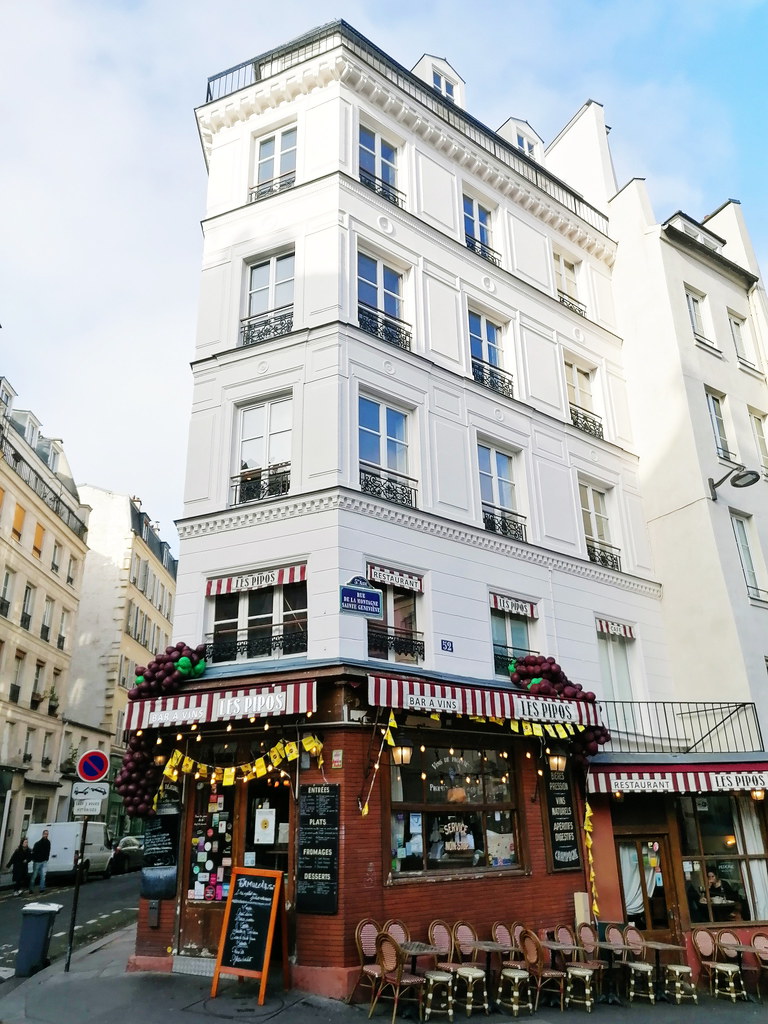 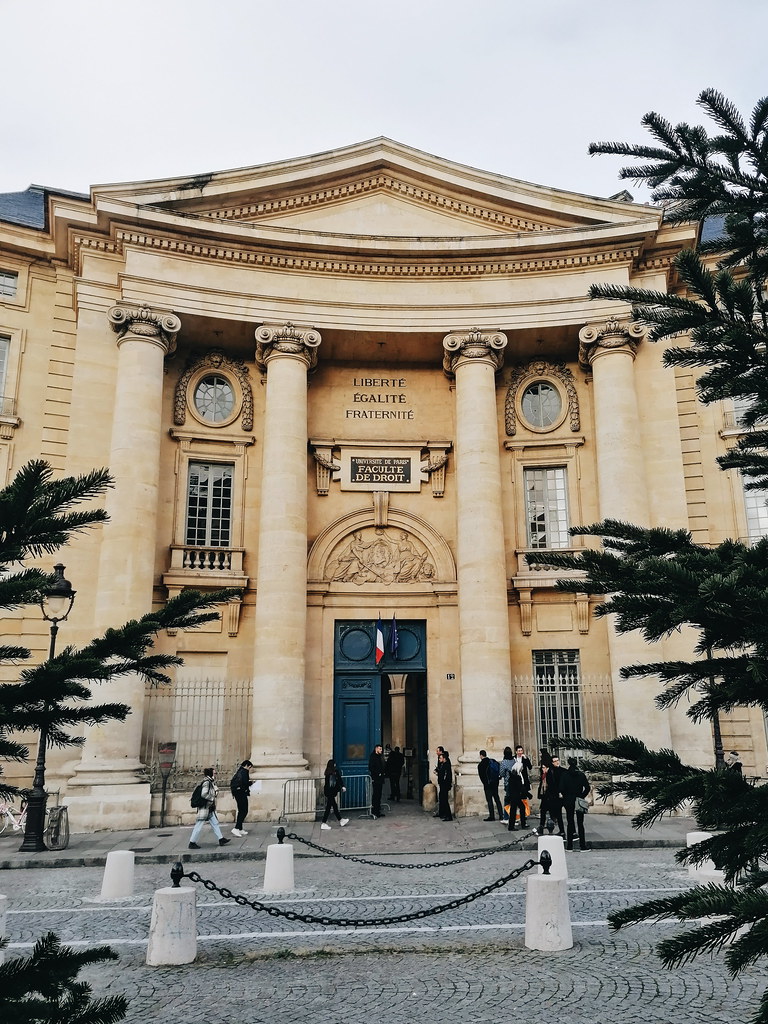 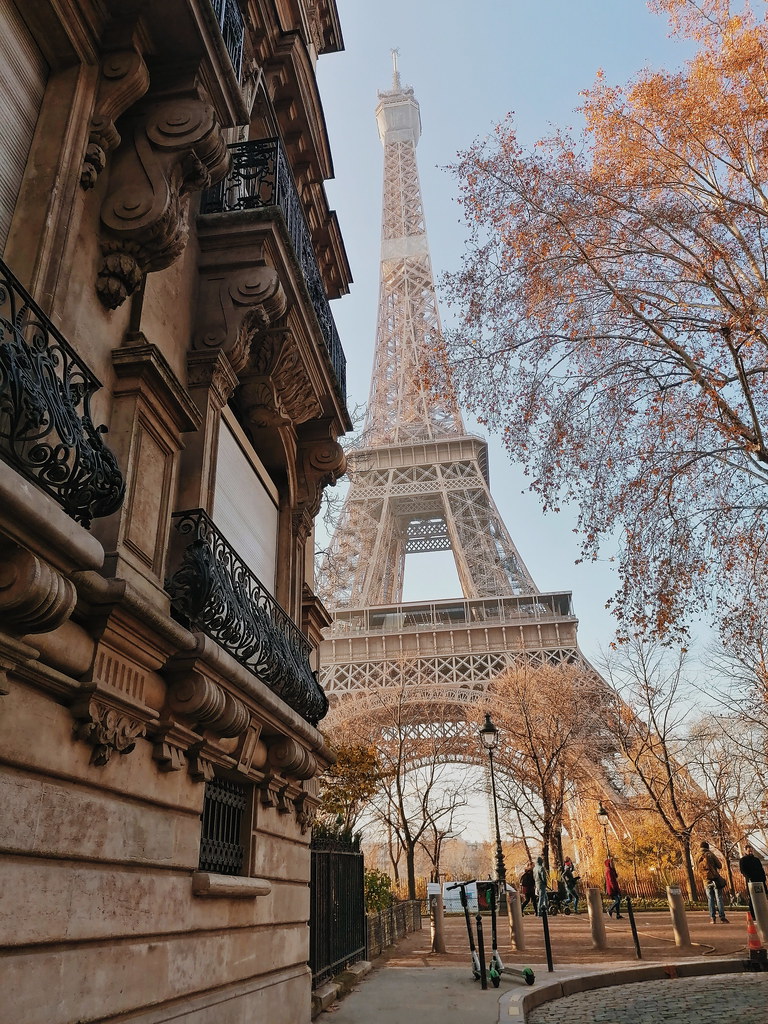 View to the Eiffel Tower from Rue de l’Université. 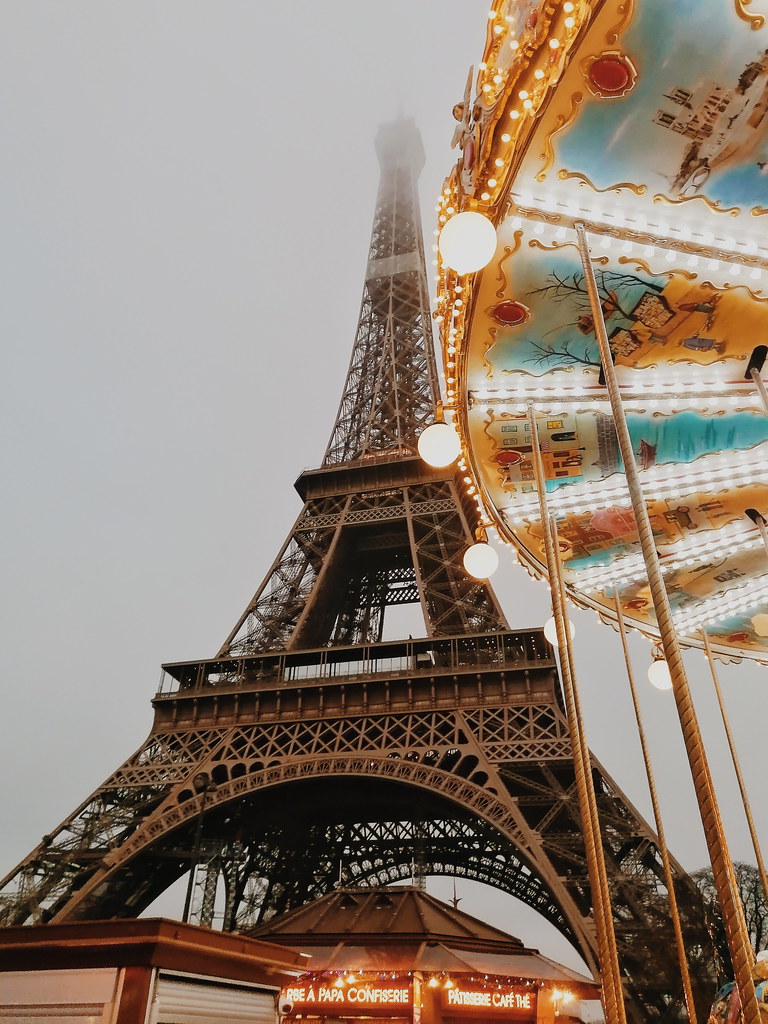 The Eiffel Tower is probably the most famous landmark in Paris, and that’s not without reason. You can go up there, but this time we were just happy observing it from the ground. The best Instagram spots to capture the Eiffel tower are at Rue de l’Université and Palais de Chaillot. 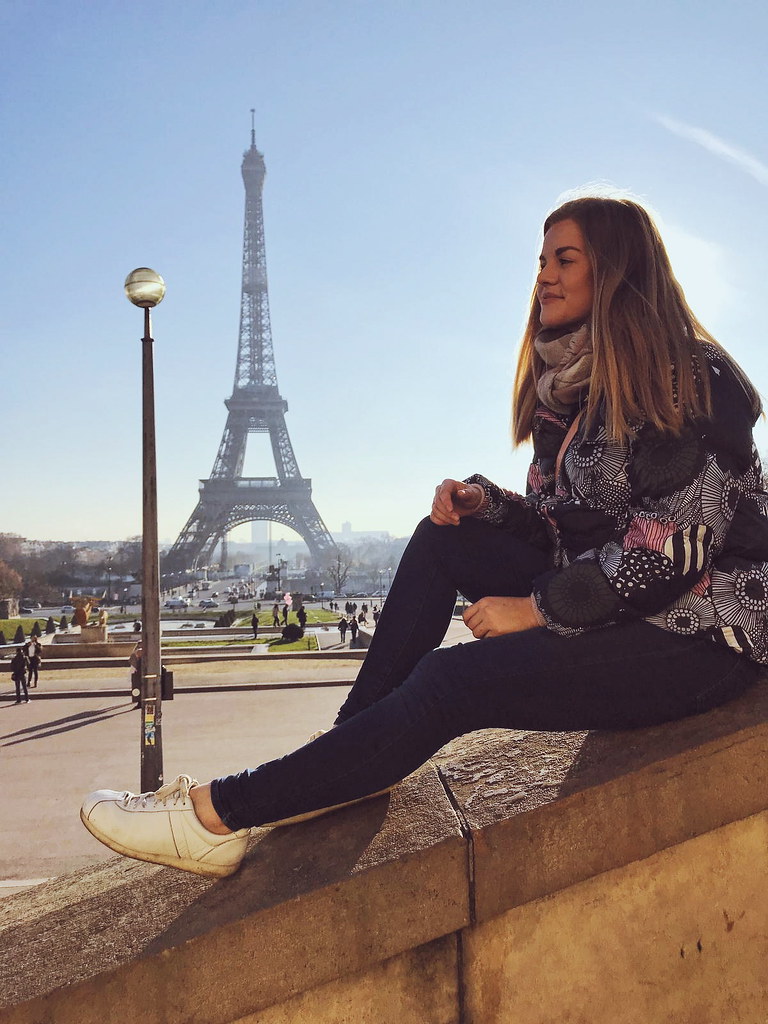 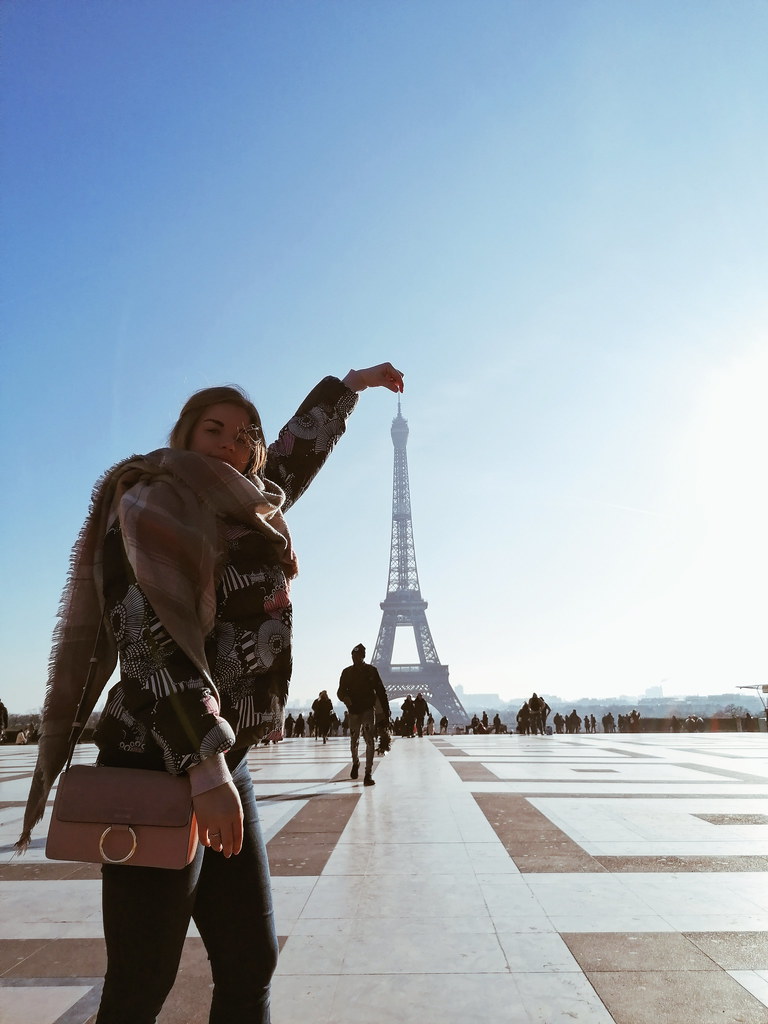 The compulsory tourist pose. At Palais de Chaillot there were so many people trying to sell you random crap, you can see one of them approaching in this photo. 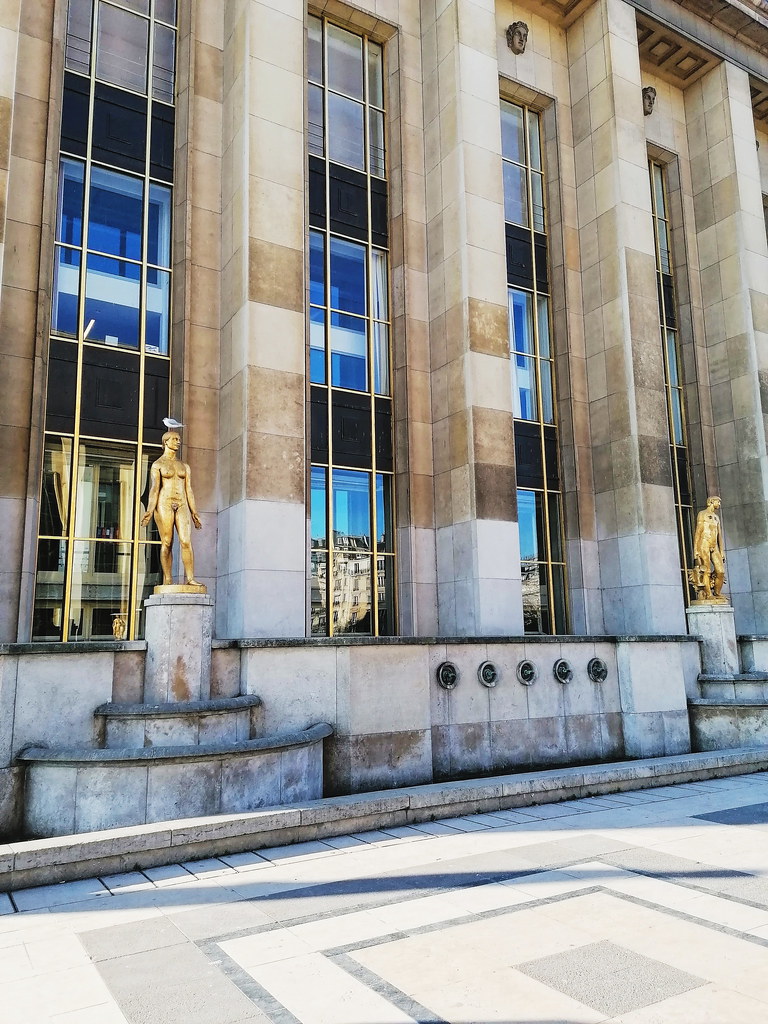 Palais de Chaillot is probably most famous as a great spot to admire the Eiffel Tower, but don’t forget to look around you. I found these golden statues and details just astonishing! 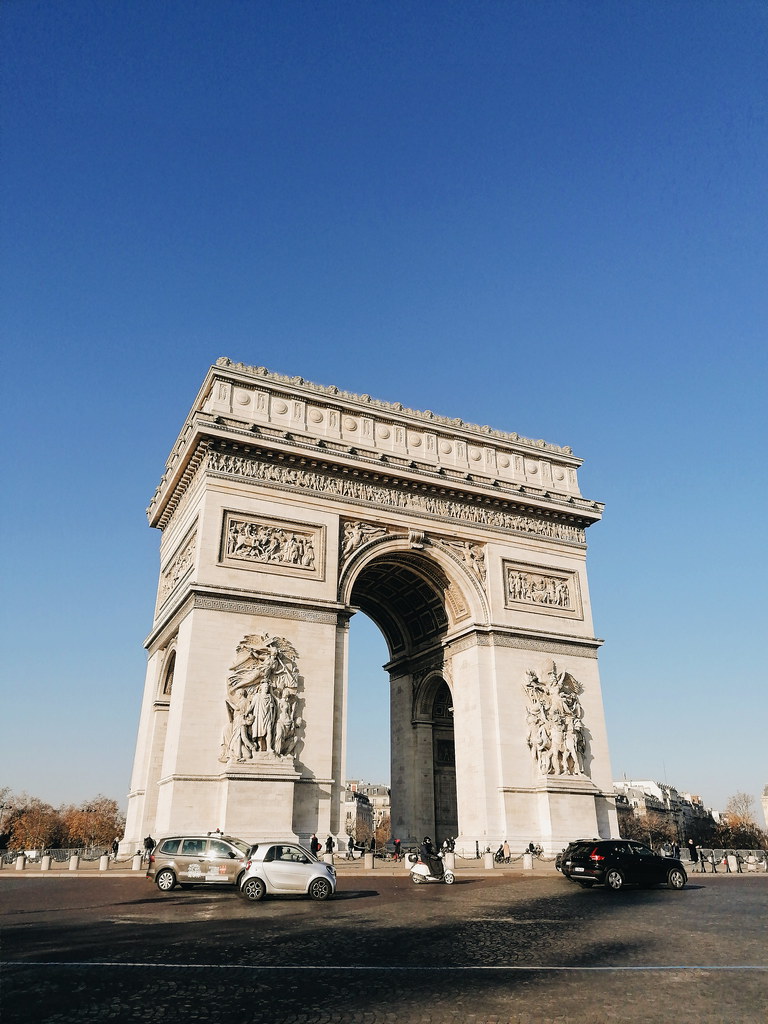 The Arc de Triomphe is located conveniently at the end of Avenue des Champs Élysées. Even though there isn’t anything specific to do here, I still think it’s worth seeing. At the end of this post, I’m sharing our walking route, which allows you to hit all the best spots in Paris, including Arc de Triomphe. 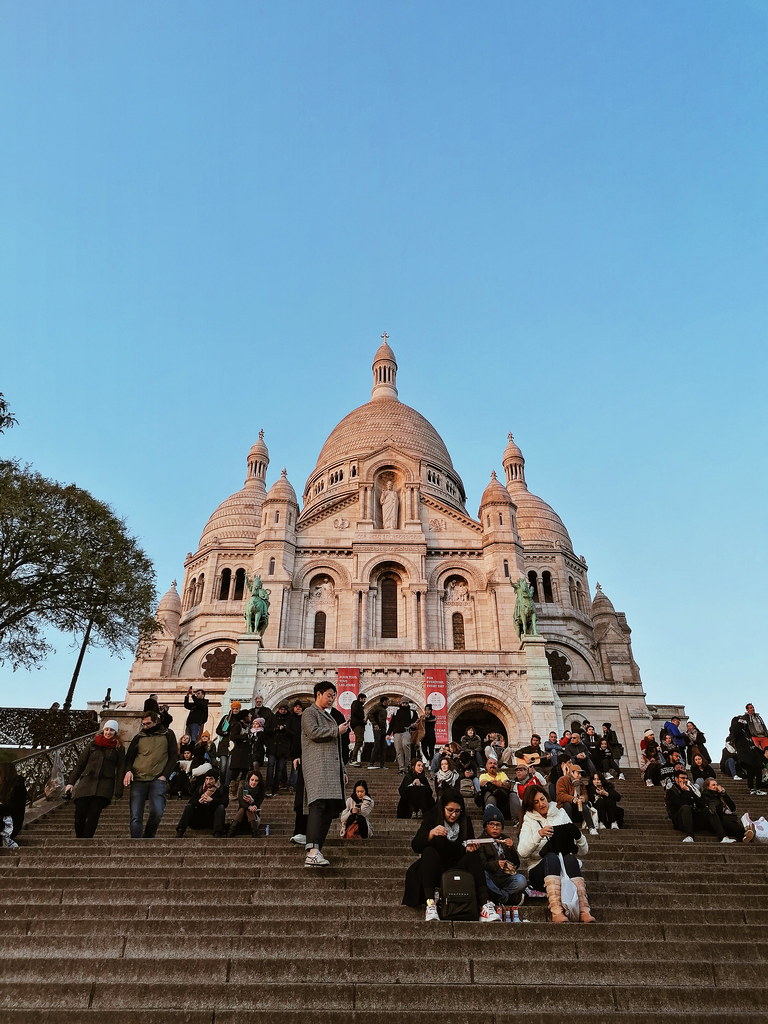 Sacré-Cœur is located in Montmartre, on a hill. The view from the top is definitely worth the stair workout you need to do to get there. 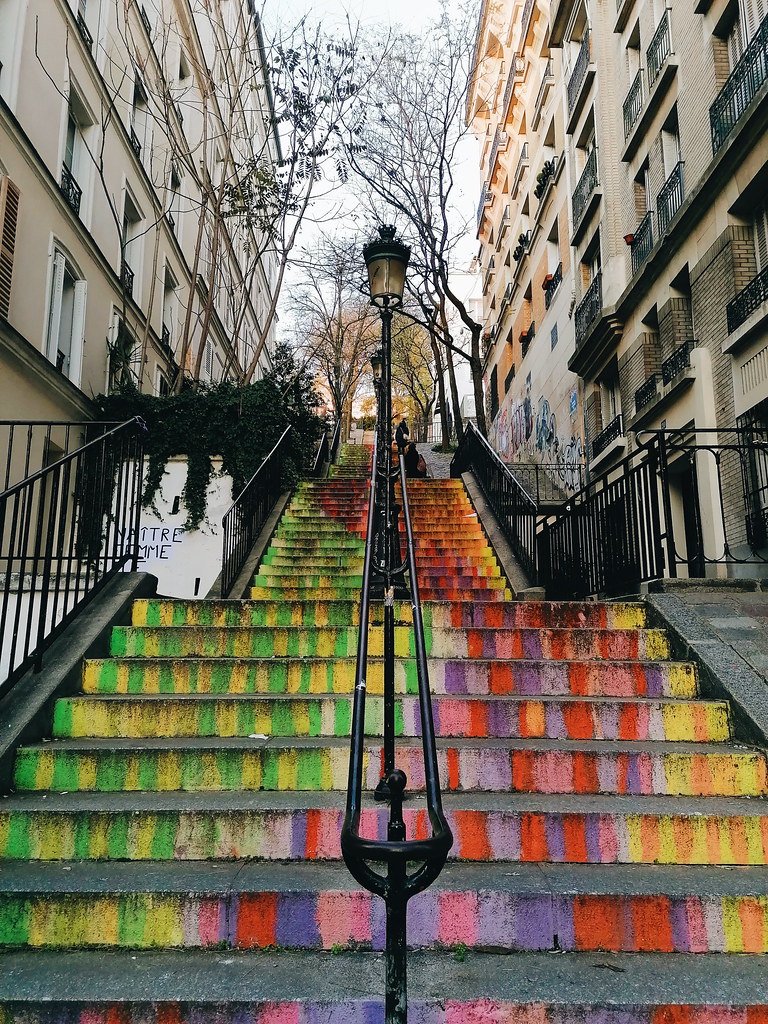 Up the stairs to get to Sacré-Cœur! 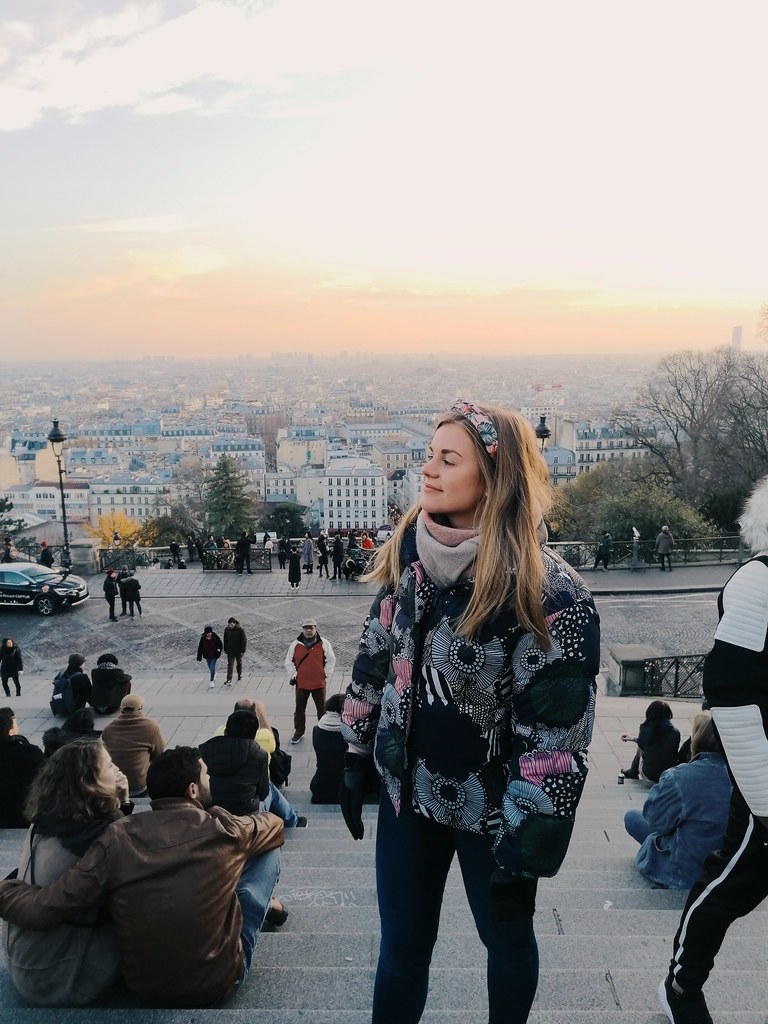 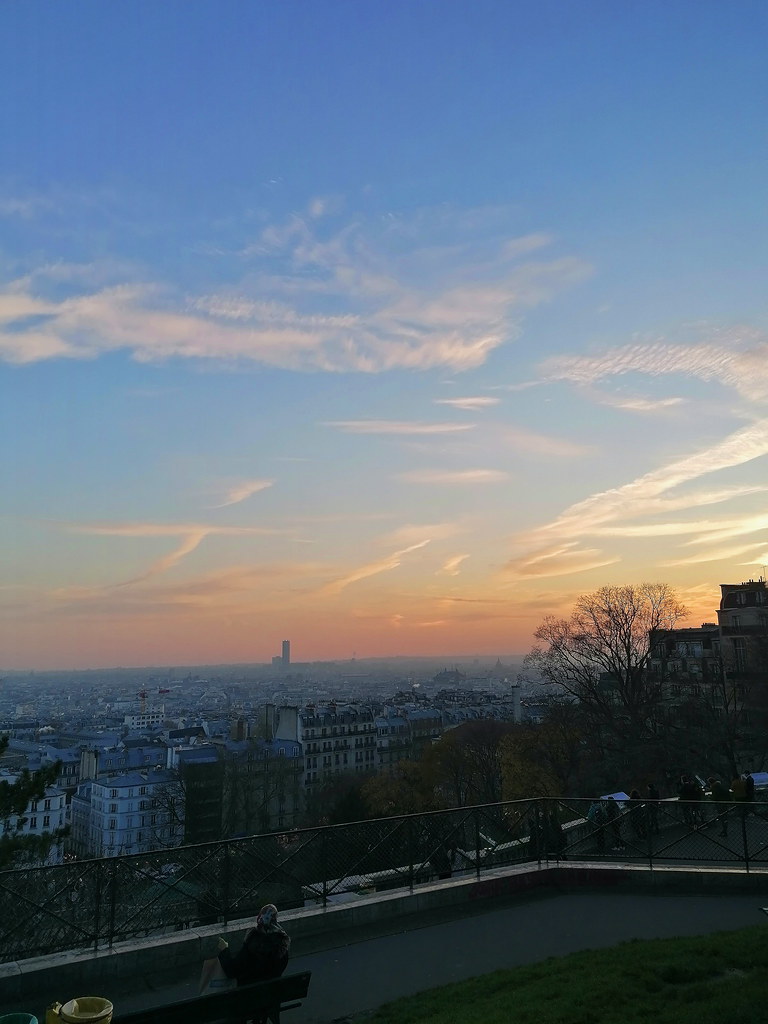 The view from the top won’t disappoint – especially if you make it there at sunset. 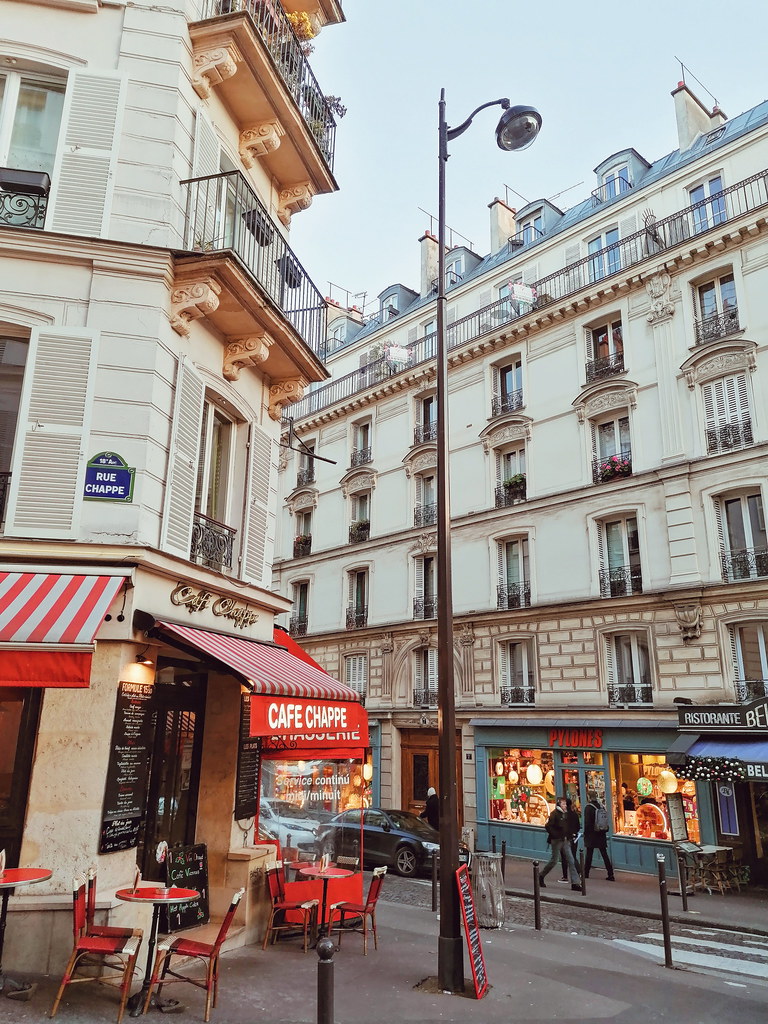 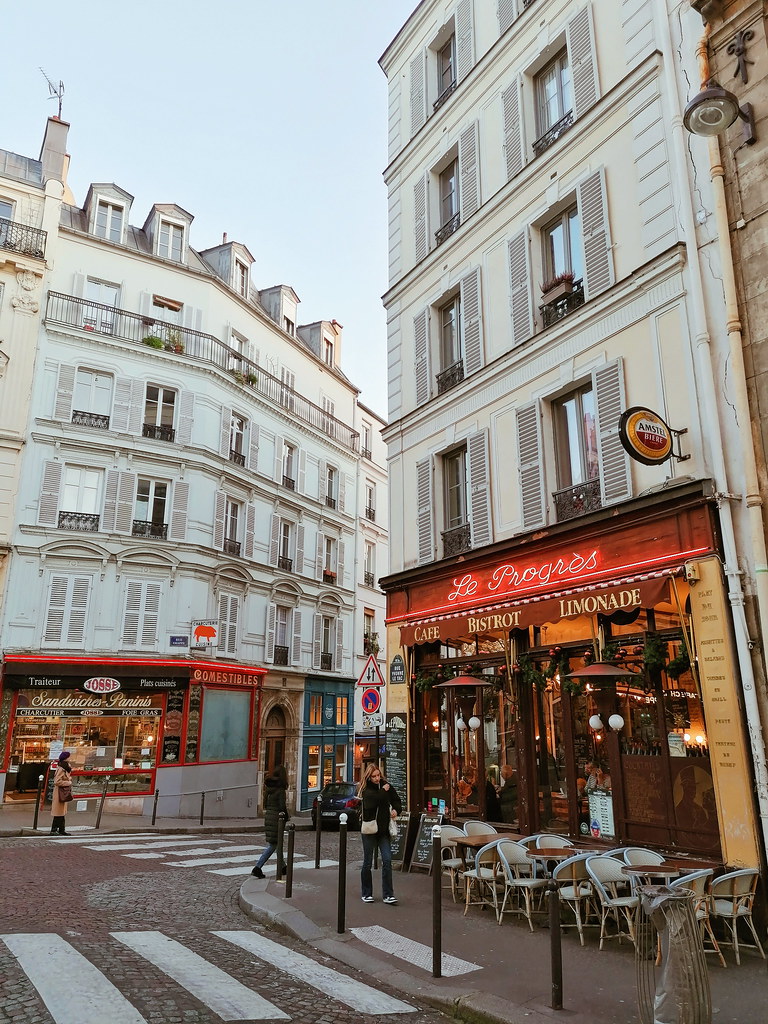 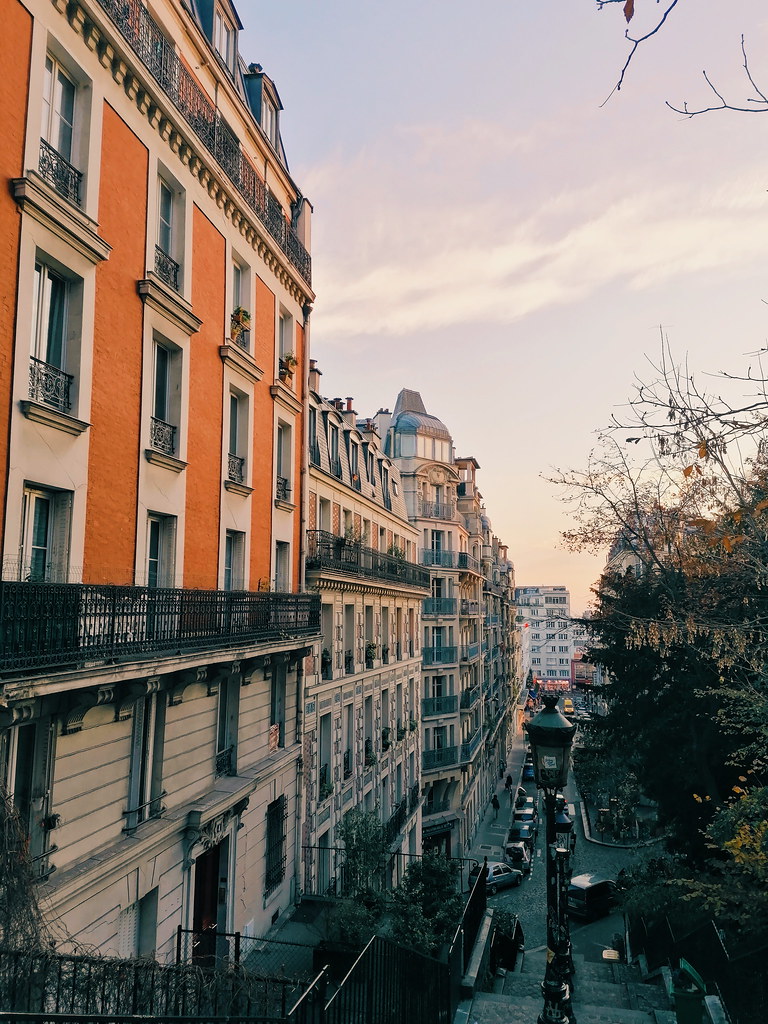 Montmartre, which is where the movie Amélie is based, was just overall a very adorable part of town. The photos probably speak for themselves.

Hotels and Airbnbs in Paris are expensive, everyone knows that. That’s why we were really lucky to find Hôtel Le Relais Saint Charles at a reasonable price. We paid 140 pounds for one night for two people, which is of course not cheap, but I would still say it was a good hotel for the price. The hotel was located near the Eiffel Tower, so the location was great. It was also very tidy, the service was good and overall we didn’t have any complaints.

Eurostar – take the train to Paris

One of the benefits of living in London is that you can simply take the train to Paris. Eurostar goes between Paris and London multiple times a day. The journey takes about three hours, but you don’t need to be at the train station hours before departure – just make sure you have enough time to go through the passport control and a quick security check. There aren’t strict luggage limitations, and you can bring liquids – vive la Champagne! In addition, the train is a more environmentally friendly option as opposed to flying.

The metro in Paris is famously awful, and I certainly agree with the statement. Therefore, we decided to walk for the most of the trip. I’ve drawn our walking route on the map and circled Montmartre and the Latin Quarter, which is where we took the metro to. 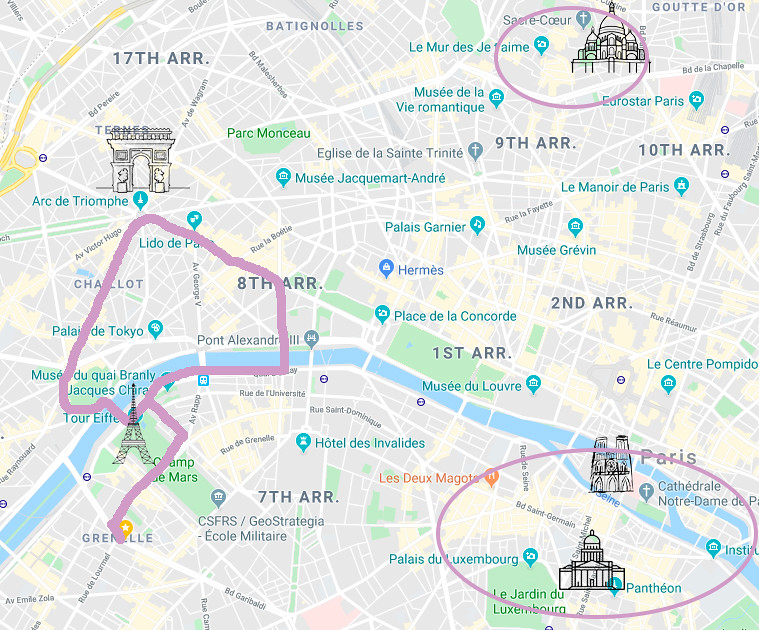 In this image, the pink polaroid camera shows you the best photo spots. 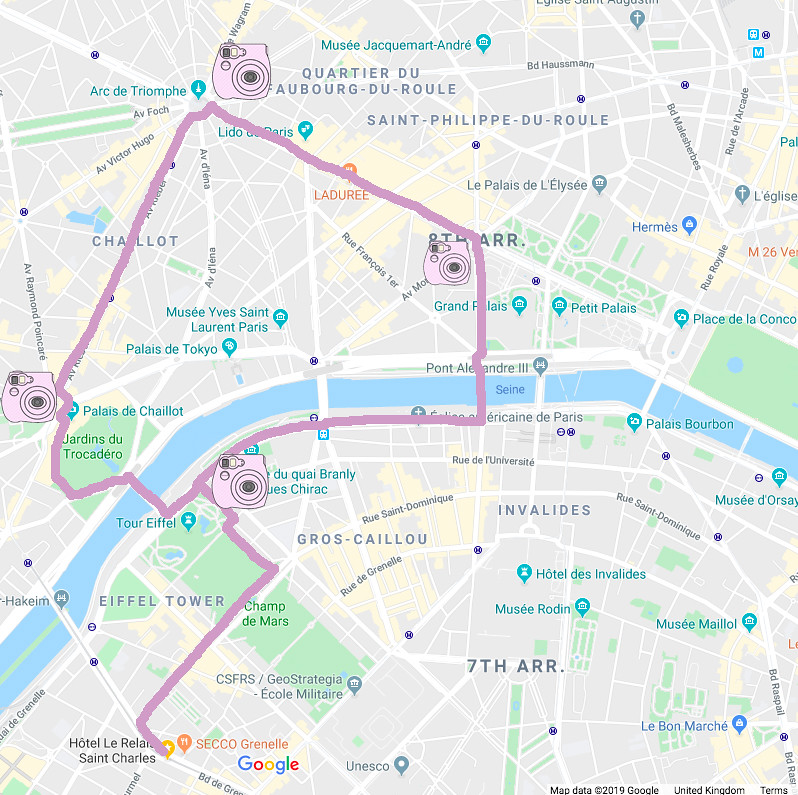 I hope you have enjoyed reading this post! I’m aware that I have only seen a fraction of Paris, as I didn’t really do inside any attractions, and completely missed out on Louvre. However, I don’t mind because now I’ve got the perfect reason to go back!

PS. All the photos are taken on my phone and edited on VSCO! Did you notice any difference?